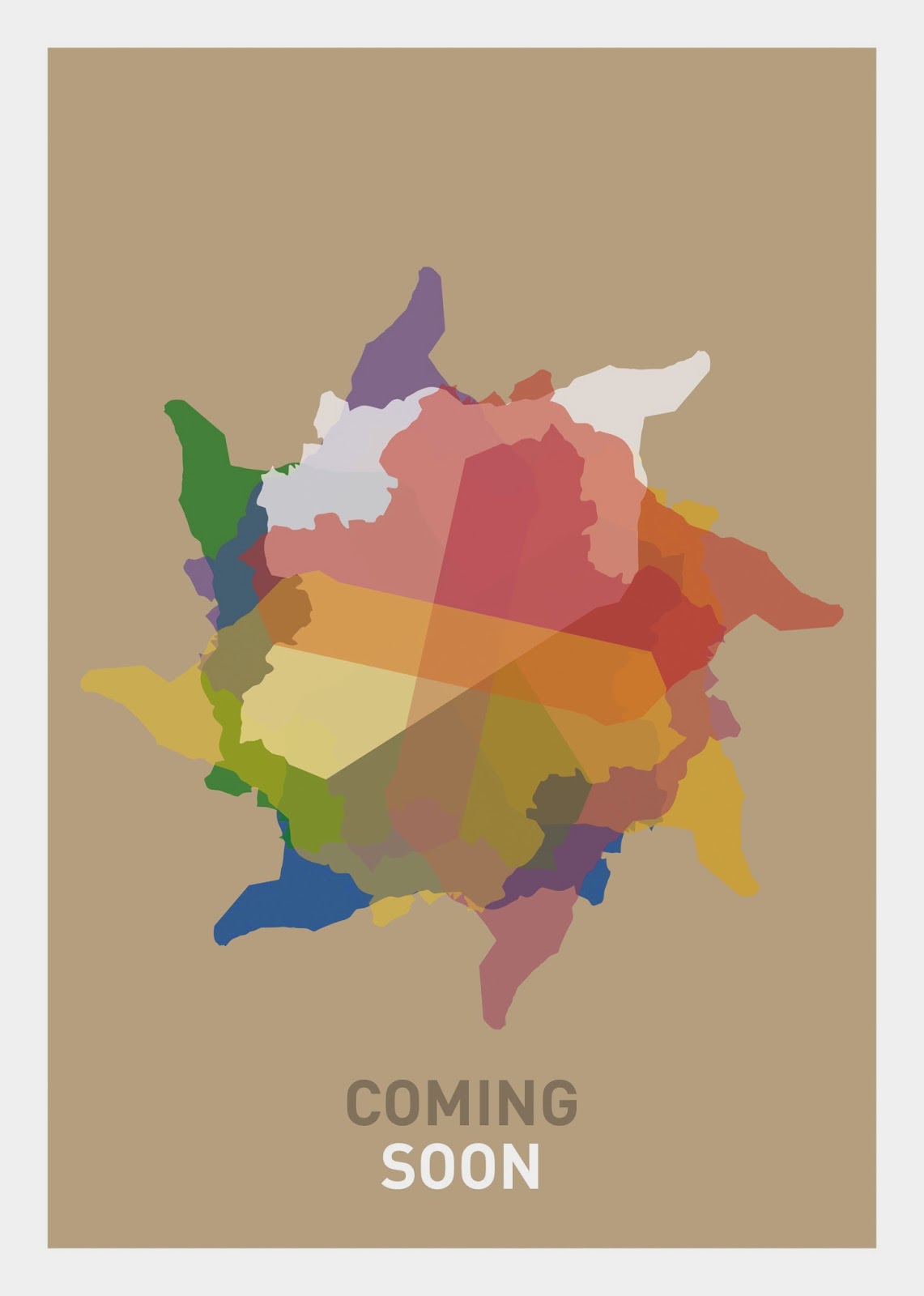 
The mission in Jordan has come to an end and we are both back home, safe and sound (except for a flu (Omar)). Thank you all again for your support and donations! We were overwhelmed by your support and supportive words!

Before we left for Jordan, we were in two minds whether it makes more sense to also donate the money we would pay for flights and accommodation and to stay home instead. The experiences we made and the projects we initiated (see project summary below) with your donations of around USD20’000, however, confirmed that our decision to go was a good decision!

I. Education (~67%)
Four schooling projects which enable ~120 children to go to school now instead of playing on the streets, which give them a daily routine and most importantly “hope”, could be seed funded with your donations for the next 6 months and will be continuously reviewed and assessed by ourselves and by the team on the ground. Hopefully, it will be enough to cover the costs until the next school year begins and they can either join a regular Jordanian school or go back home. By employing three professional teachers who are refugees themselves, you also help to secure an income for three refugee families. Thank you!
You are invited to donate to extend and / or continue these efforts.

II. Emergency (~26%)
Seeing the suffering of the weak and poor on the ground, we decided to initiate this “emergency fund”. Some of the beneficiaries are, for example, a widow and three children (paying her modest rent for one month), a family with 12 children whose father had gunshot wounds to his leg (paying their modest rent for one month), a widow with 4 children suffering psychological problems (money for food), a project that distributes bread vouchers which can be redeemed at the local bakery, etc.
You are invited to donate to extend and / or continue these efforts.

III. Medical (~7%)
Health and good nutrition are probably the most important prerequisites to go to school and thus this should be the most important area. However, given that the Syrian-US-NGO we joined, as well as international organisations are taking care of this aspect, we focused on education but still spent ~7% of the donations on vitamins for the many anaemic children we saw, as well as on two blood pressure measurement devices for their parents (we encountered refugees with either very high or with very low blood pressure and the clinic that is supporting Syrian refugees for free had only one measurement device).

Wrapping up
The suffering of Syrian refugees in Jordan and the neighbouring countries is ongoing and omnipresent and the children are the most vulnerable and affected victims. We believe that your donations made a small but important difference and hope that we can extend the ongoing projects and initiate new ones, such as a “trauma school for children in need of professional psychological support”.

You are invited to donate to extend and / or continue these efforts.
Unless otherwise indicated, all further donations will be added to the areas where they are most needed.

In the name of the children and the needy, thank you very much!
Omar and Jasser
Eingestellt von Unknown um 04:05 Keine Kommentare: 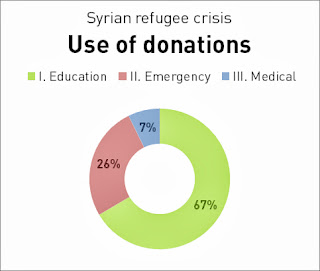 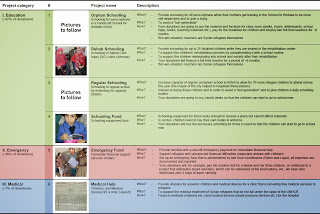 
In the beginning of our stay in Jordan we asked the local volunteers of the Syrian-US-american NGO that we might at some point select / employ teachers for the education projects that we wanted to fund with your donations. We asked them as well as the head of the Spinal Cord Injury clinic to find adequate candidates for the selection. We were informed on Friday that one teacher was found and that we could meet with her on Saturday. This teacher has almost 20 years of experience in teaching and is a refugee herself.

We asked our local support Reem (herself Syrian, from the US, studied at Georgia Tech but lives now with her family in Amman) and Noor (herself also Syrian, teacher, studied at MIT and is now teaching Jordan's best private school) to come along and help us with the interviewing.
Our selection criteria were: open-mindedness, open for feedback, ideally motherly figure, awareness of the childrens’ special situation, ideally Syrian refugee herself, thereby hitting two birds with one stone.
The general feedback was positive and we were happy to put her into round two. More teachers will be interviewed, in Amman for the Spinal Cord Injury clinic as well as in Irbid for the School for Widows (with the half-orphans) where we have two positions to fill.
Reem and Noor volunteered to continue the teachers' interview process while we are not on the ground.
Eingestellt von Unknown um 12:15 Keine Kommentare:


Traumatized children
Today went to Ramtha, which is a Jordanian border city to Syria. We set up our mobile clinic at the regional branch office of the Jordanian Womens Union (JWU). The doctors saw more than hundred Syrian refugees for consultations and treatments, and they again received free medication. In the meantime, some of us took care of the many children that had joined their parents for their visits. During the morning hours, we got the children engaged with water colour painting, which, from the experience of the previous days, had a very soothing effect on the children. We spoke to their parents, who expressed their concerns about the future, and possible scenarios for Syria. The employee of the JWU told us a story of one of the painting children (Douha). When she arrived to Jordan, she would not speak because of the shock she had from the bombing in Syria, but that now, especially through a special children programme, she restarted to speak again. 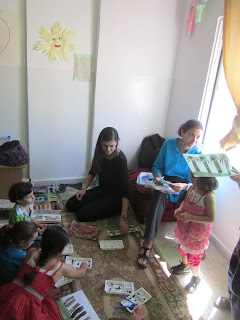 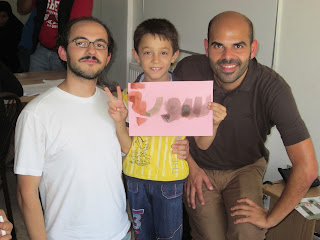 We were also interviewed by Drew (who is making a documentary about the mission), who asked us questions about the educational projects we will be supporting with the help of your donations.

Zaatari camp visit – living in the desert in a tent, and no end near…
We had a lot of respect of the visit in the afternoon, as the Zaatari refugee camp visit stood on the agenda. Until now, the Zaatari camp has grown to the largest camp on Jordanian territory, and the fourth largest (!) city of Jordan with its 140’000 refugee inhabitants (UNHCR), which makes it, in terms of its population as big as Darmstadt (our hometown in Germany). In Zaatari, we met local staff from the IRD (International Refugee Development, which works together with the UNHCR). They spoke to us about the camp in general and the most pressing issues in detail. As major challenges, the IRD representative mentioned (1) the situation of the elderly (daily care, medical treatment etc.) and the necessity of a retirement home as well as of the (2) situation of childrens’ education. As to the first challenge, the camp so far cannot provide an infrastructure to allow elderly people to have the support and care they need. In terms of education, not all children in the camp go to school on a regular basis. Efforts exist but time is playing against the children and they are losing momentum…

Moreover, the increasing influx of new refugees is not stopping; it fluctuates according to the number and severity of the attacks on Syrian cities, and goes at times up to 3’000 refugees a day. As we could not set up our mobile clinic in the camp, we used our stay at Zaatari to discover the site and get a feel of its dimensions (9km perimeter). 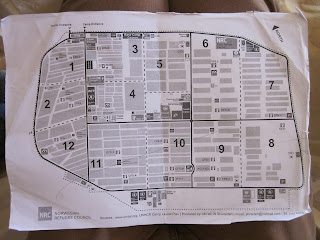 In January 2013, Zaatari camp consisted only of sectors 1 and 2. 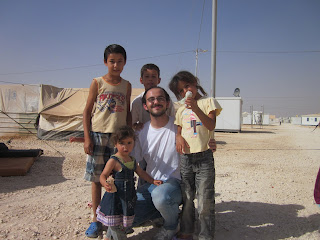 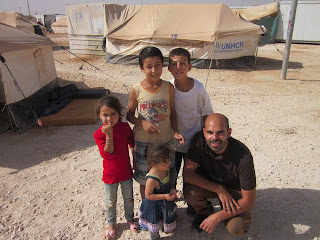 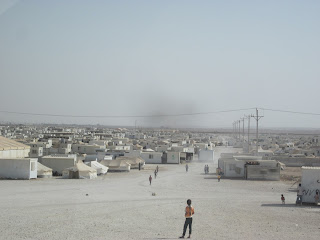 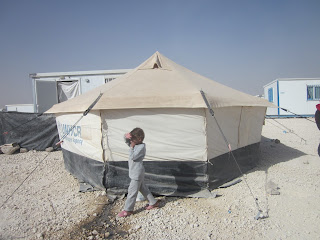 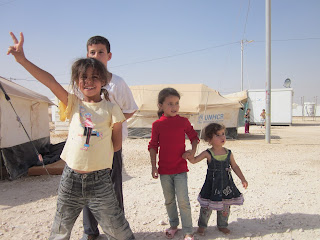 As mentioned in earlier posts, by far not all refugees live in camps. Some of them, among them very tragic stories, live in the proximity of the camps, in run-down houses, or even in tents that someone had “taken” from the UNHCR. We visited a number of these houses, and went into their homes to assess their situation. Thanks to your donations, we will be able to support these families (widows; old men who are injured (e.g., shot into the leg), families with a large number of children and no breadgainer,… 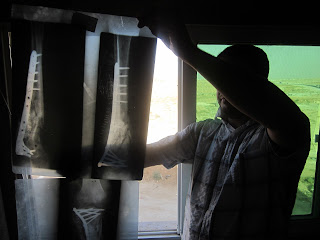 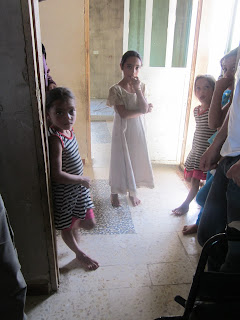 There is no mobile clinic tomorrow, which gives us the chance to study our projects in more detail, so that you will have the update over this weekend..
Eingestellt von Unknown um 15:56 Keine Kommentare: 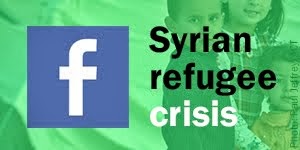 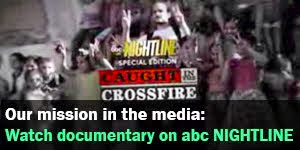 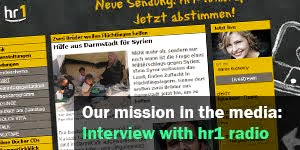 To give you a feeling what your donation could buy... 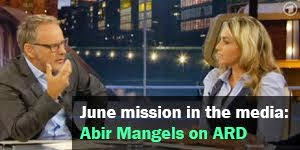